He didn’t want to kill again, but he had no choice. The young challenger stood before him with his razor-sharp weapon, calculating his first strike.

The challenger was dead in seconds. “Master,” as the Japanese samurai was called, cut his opponent with the upswing of his sword and then again on the downswing.

N.U. spoke while lying back in the recliner in my office. He was in a deep state of hypnosis and was remembering his lifetime as an ancient swordsman.

“I’m really fast,” he said, while recalling this incident that took place more than 500 years ago. “It seems like I’m moving slow but I’m not. It’s like my hands are alive. I feel the energy in my hands. It’s like from my wrists down they’re alive with energy and I can sense when someone’s going to attack. So it looks like I actually move before they move but, they’re thinking about moving, but I’m that fast. I sense their intention before it gets to their muscles. I sense their intention to move and I sense it through my hands. People think I attack first but I really don’t. People don’t understand this.” 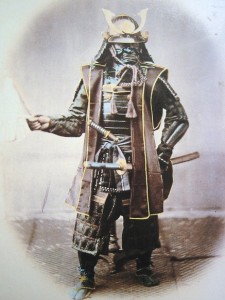 This is the voice of N. U., a fifty-six year middle school teacher who came to see me to do a past-life regression just because he was curious. He went easily into a deep trance and responded to my questions without hesitation.

N.U. described the scene as a beautiful garden area. I asked him why he was fighting and he said his challenger, “Heard about me and he wanted to see. It was my duty to show him. I’ve been taught to tuck in my chin down low, for balance and to be humble. Again, it makes me faster.”

I asked what happened after he killed his opponent.

I took Master to his point of death in that lifetime. He was about 80 years old. He said he died of old age and because he was tired. I then guided him to the Place of Review, the place in the ethereal realms where he could see the big picture of the life that he just left.

What lessons were learned from this lifetime?

When asked what he learned he said, “Discipline. Respect for everybody and everything. I always did the right thing. I never lost focus. I was very serious. Every day was discipline, that’s all. The swords were beautiful.”

He also learned how to channel energy, and how to move energy in and out of his body, mainly though his hands.

“I should have taught more people how to do that. I kept that kind of a secret. I couldn’t share everything. I think it would have been used against me.”

I asked him how he learned to channel the energy and he replied, “I was taught by other people. They’re kind of like

people but like spirits, too. I listen to them when I meditate. Other people could hear them too but they didn’t listen. They thought they were silly. They just show you how to do it, they don’t really teach you (in the conventional sense), they show you. It’s possible that you could to do this. It’s no big deal. Anyone can do it. But no one does.”

I asked if he could use this knowledge in his current life, if he wanted to.

Yes, he said, but not for bad. “It’s the same energy used to heal people. You draw it in and let it back out through your hands. It’s like your hands have a life of their own, full of energy. I didn’t use it to heal anyone in that life, I used it to be fast. I can feel it in my sword.”

He said he knew about that energy as N. U., “I always have. I also have the knowledge of how to stand alone, by myself, when I need to. I laugh a lot more now than I did back then. I still remember to tuck in my chin – it tightens the neck muscles – puts your balance forward – so you can move fast.

“I didn’t love anyone back then – nobody. I understand that now. It’s why I don’t get too close to many people – cause of that lifetime. Even when I’m close, I’m not really close. I still have that feeling, I still have that person in me, not as strong though, he doesn’t override me (as N. U.)”

The Master speaks to N.U.

“I can see myself now, back then,“ N. U. said. ”I’m just standing there, looking down at the ground. It’s funny because I look so serious. I can’t be that serious any more.”

Asked why he was so serious he said, “He was a samurai. He had to be ready to fight all the time.”

As N. U. pondered Master’s life, he said, “He should have enjoyed himself a little more.   He should have let people in.” He said he died in a cave by himself, lying on his right side. 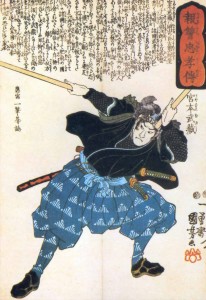 As he got more clarity about Master’s life, the name Musashi came to him. He said Musashi wrote a book about the energy, but that people only absorbed the information about the fighting, that they didn’t understand the energy part at all. The name of the book is, “The Five Rings,” and is available to this day.

How will this memory affect N. U. now?

He’s still studying, still learning about the energy. But he’s happier now, not so serious. After all, he doesn’t have to worry about someone challenging his life at any moment! 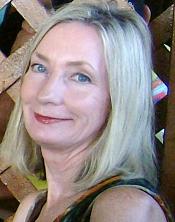