I have known Diane Ross for well over a decade and yet am continually impressed with her wisdom and knowledge. Diane’s education in metaphysics and spirituality is incredible. She is constantly researching, reading, and practicing her craft, and sharing that information to assist people on many levels. I truly believe that knowing Diane has helped me in walking my path in a more conscious and thoughtful manner. Diane’s hypnotherapy, classes, and just knowing her have added wonderful, positive experiences to my life…and I thank her.

Hi Diane,
I learned the Brain Shifting technique from you at HEA (Hypnosis Education Association) Conference last fall and wanted to let you know how well it is working for me as well as for my clients! I use it in conjunction with my Zap Method, and boy, is it powerful! I can get to sleep more easily as well as remove thoughts upon which I do not want to focus. Just wanted to let you know.
Warmly,

Thank you for an excellent presentation (on The Secret). Intellectually I may have known some of that, but I definitely discovered it last night. I am not sure that I will be able to continue with the techniques you gave us, I have the meditation CD (my wife does anyway) and I will give that a try. It was so easy when you took us into it, I could not hear anything but your instructions and the background music, and the visualizations were only what you told us to visualize. If I can’t reproduce that on my own, I will be bothering you to do it again.
Also, your work with my wife has produced not only a more slender woman, which is why she went to you, but it has virtually removed a worrisome trait she has carried for thirty years. She has always had a knot of muscles on her upper back from being tense, and her personality was such that whatever anyone said she became defensive as if she were being attacked. Since seeing you, this has disappeared. I am sure this will have a direct effect on her physical as well as mental health. Thank you.

Diane,
Thank you for your influence on my life. I was able to handle a direct confrontation to my face by a very hostile gentleman today without reacting or fleeing.  My client was watching and said how amazed she was that I was able to pause after everything the man said to me and think before responding. I was even able to end it by saying “I will not let your anger affect me, so have a nice day”.
Diane, let me tell you this is not who I was in my 20’s and I attribute a lot of it to the fact that in the last two weeks I have been listening to your CD’s again, and the effect of mindfulness that you taught me as had.I am not saying that I am perfect at handling conflict, but that when it comes into play all that you taught me is so helpful at being a better person and keeping my head up.
The CD on handling a break up is so powerful and potent that I will have to listen to it several times to absorb all its knowledge. I will say that the talk before the meditation was very informative and helpful. I was able to understand everything, even what the people in the audience said, and it made me feel like I was a part of the group. Thank you so much.

My sessions with Diane Ross and attendance of her workshops has hugely impacted the quality of my life today. Her wisdom and spiritual clarity has helped me alter my perspective in a way that brings me peace, love, and abundance like I have never known before. Her guidance has accelerated my spiritual development and her teachings continue to shape my mental and emotional well being. I am grateful for her presence in my life today. I am blessed that her timeless knowledge and intuition have not only had a positive and effective impact on my thinking but also on my relationships with friends, colleagues, and family. Diane is a messenger, a mentor and a powerfully attractive spirit.

Diane Ross is an amazing person who has allowed me to discover things about myself that I never realized. I am a much stronger, happier, and successful person thanks to the effective program she has designed. I strongly encourage anyone who is interested in improving themselves to listen to her course!”.

Diane,
I went into the meditation with the intent to learn how to be more effective in helping to save the Earth and people. Maybe this was too broad an intent; however, it just occurred to me when you mentioned it.

Interestingly, the first image I was a very small bear – like a stuffed teddy bear. However, very soon that image changed into a polar bear.
I encountered a very large white polar bear (female) with two cubs and very briefly her mate, who was not totally white; was more beige colored. I was acutely aware of the cleanness and clarity of the environment. The ice and the cold air and the blueness of the sky were intense. The water was clear and pure; one could feel the purity – no contamination – no pollution. I felt the cold water flow through my mouth and licked the ice. Most of all I felt intense power; I was so energized that I gasped and the hairs on my arms and head to attention. Tears came to my eyes. This was purity never before experienced! The joy of the bear was that of being alive and being pure love, strength and force in a pristine environment; power and force – purity supreme! The world of ice was clearly the crystal that reflected the beauty and joy of being alive.

My bear took me deep into the waters, down, down, down, through caverns and into the darkness, deeper and deeper until we were in the bowels of the earth. There I saw what I had to see — eruptions, boiling up, spewing corruption, pollution, poisons, evil. The earth was vomiting from the disease that mankind has brought to her. I saw people and parts of people being tossed about in the diseased sewage. Mother Earth was purging; gasping for breath; purification is in process but with a very long way to go; in a life or death struggle. At the same time, I felt the strength of the polar bear that enabled me to stand the horror of it all. Throughout, I felt such force, energy, love, nurture, something so solidly sleek and impenetrable, like white/silver metal of such strength that could never be penetrated; enduring like a world unto herself.

Then, I was transported (can’t remember the transition) to land and I was one with a black jaguar/panther; sitting patiently, with eyes that did not miss anything; then walking with such strength that I could feel the muscles stretching, coordinating, like a ballet, very measured and beautiful. There was a beauty about this that was exquisite. I felt confident, content. Again, I felt exorbitantly energized. At first I felt that I was male but then I realized that both male and female qualities resided here in this magnificent cat. I knew I had the attributes of a skilled hunter; that I could kill in an instant. The odor I encountered was the smell of sulfur (I smelled only cleanness with the bear) and I could taste meat in my mouth but only faintly and rather sweet. Walking about was such dignity and with a feeling that something was about to reveal itself to me. At the end, birds came to the jaguar and were flying around him/her as if talking to the jaguar.

I have now attended your last 2 classes at the sage center and I am pleased at what has evolved in my life.  I am finally listening to my inner self and no longer question my decisions.  I have also had a major break through with my mother….she finally heard what I said for the first time in 31 years!   She finally understood that viewing my as herself is unhealthy!  Anyways I just wanted to thank you…

I am so glad I found out about the wonderful work that you do!

Last night’s session was so powerful for me.

In the past, I have been through many years of inner exploration and counseling, but your sessions allow one to get right to the heart of the issue in but one sitting.  The methods you practice are extremely successful, easy, fun and help put me in charge of myself!  I really thought I had worked through all of my anger from the past, but last night I realized that I was still living the pain and unhappiness that my parents had.  When they told me it was their pain, and they didn’t want that for me, they released me from that responsibility; it truly hit me unexpectedly.  I also felt much compassion for them not having a happy life and wished for that to go away for them. Today I have felt like a new person and excited about what my life can become now.

Keep doing what you are doing!  It’s amazing!

The power of this work ripples through my life everyday. I started with Diane to give up smoking. My smoking habit disappeared because I was too excited about getting a new sense of my ideal self! This new sense of my self is so important in supporting me through anything I do…and it’s penetrated so deeply that sometimes just breathing will bring me back to a place of contentment – a contentment from knowing I can allow myself to feel 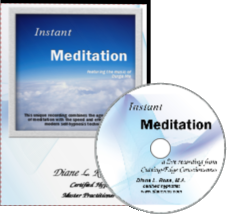 CD OF THE MONTH 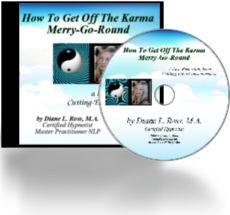